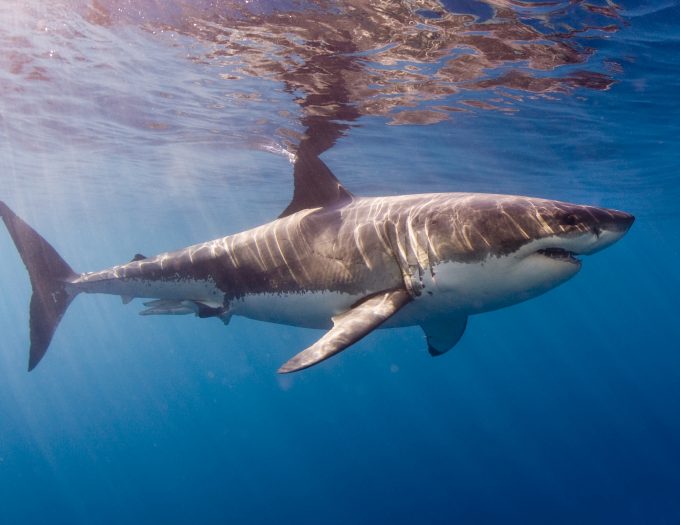 A great white shark skimming the surface – intimidating the hell out of anyone up above… and down below for that matter. 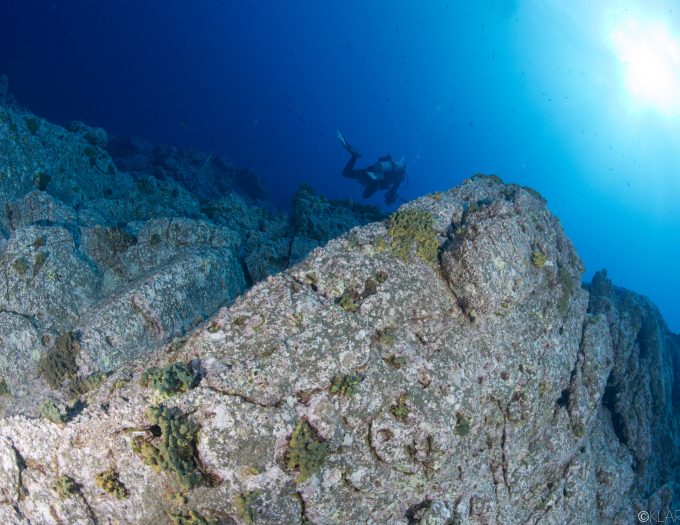 A diver scaling the rocky topography of Socorro Island 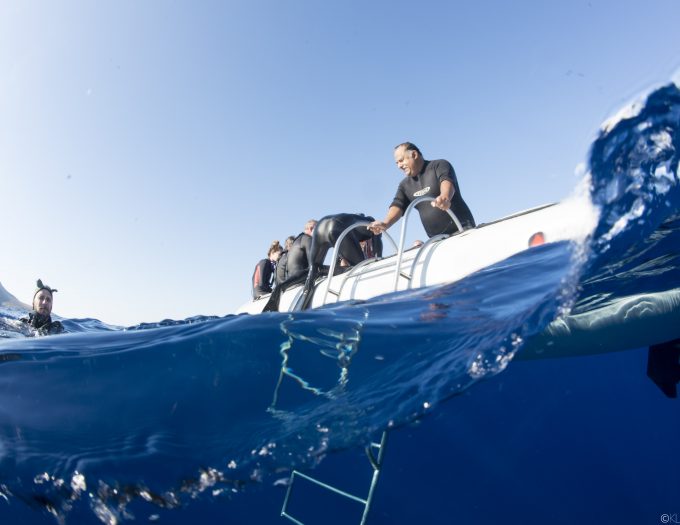 My saving grace after the longest twenty minutes of my life. 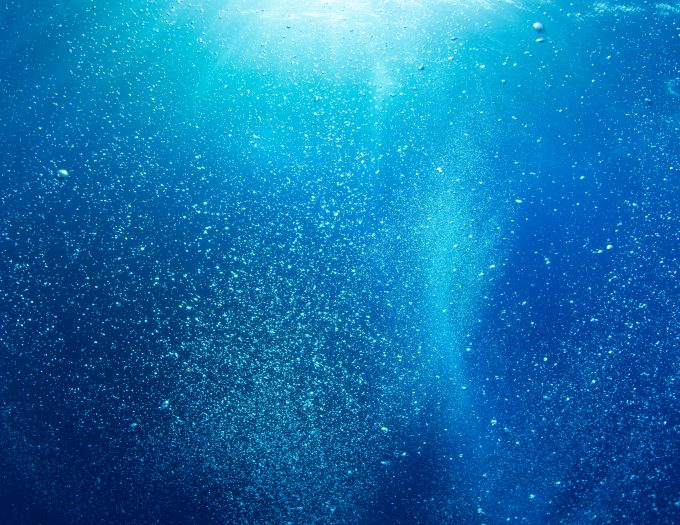 My only company, these mesmerizing bubbles blinded me as I attempted to keep up 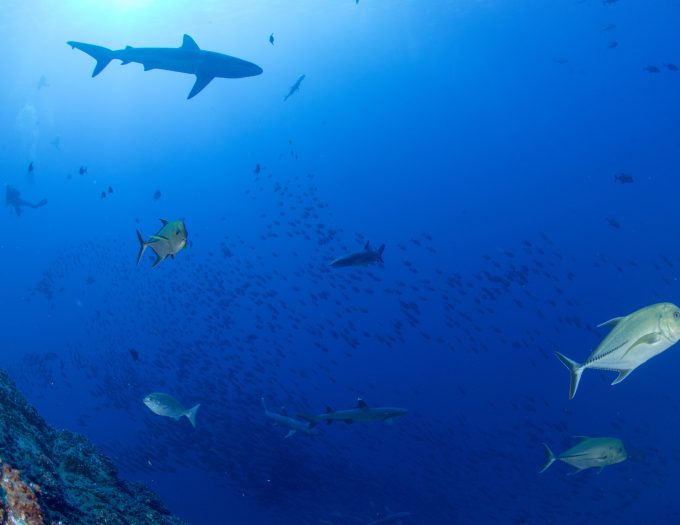 Down below, every hour is golden hour on these protected islands

“As I drifted through the open ocean without a friendly face, coral head, or bubble for comfort, I felt proud of myself for staying calm, for staying poised — until I saw him.”

They say not to panic, they say to remember your training…but you never know how you’ll react when you’re in the face of emergency. As I drifted through the open ocean without a friendly face, coral head, or bubble for comfort, I felt proud of myself for staying calm, for staying poised — until I saw him.

This is Roca Partida, a small island part of the Revilliagigedo Archipelago, 350 nautical miles off the coast of Cabo San Lucas. We were aboard the Belle Amie Nautilus, easily the most luxurious liveaboard I have yet to experience, and were on our second to last day of a six-day dive trip. Thus far we had unbelievable encounters with giant Pacific manta-rays and incredible wildlife sightings ranging from octopuses to schools of hammerheads. The crew was professional, loquacious, and friendly – we quickly made friends and felt right at home during delicious meals together and downtime in-between dives and naps. Rooming with my partner, we were offered one of the two suites onboard – which was both larger and nicer than any place I called home throughout college. We were promised an adventure of a lifetime, an unforgettable journey, and we got nothing short of that.

Hailing from Colorado and one of the nation’s most prestigious dive shops, Ocean First, our well-traveled group had plenty to compare this trip to, yet we were still blown out of the water during our time in Socorro. I am a recently certified Open Water Instructor, trained in a variety of specialties including Stress and Rescue – a useful course in identifying and addressing panic in in-water situations. Though I’m afraid training only goes so far when real emergencies hit.

The skiff had dropped us off a bit further than usual to compensate for the ripping currents. Down we went, finning feverishly toward the site – a single, rocky pinnacle surrounded by nothing but open ocean. I found myself in the back of the pack and after an initial check-in with my dive buddy, struggled to stay with the group. No matter how hard I kicked, the current kicked harder, and it wasn’t long before the tanks of my comrades disappeared into the blue. Surrounded by bubbles, I felt I would find them in no time, but with a strict lost diver protocol in these dangerous waters, I knew time was running out.

Once it became clear that I would not rejoin my team, I began to make my way to the surface before the currents swept me any further away from the site, the Nautilus, or my comfort zone. 50 feet below became 40 and I began to feel more at ease as the sun came into view. Heading toward my safety stop to off-gas (and off-nerve) I began folding the arms of my camera strobes – a rookie maneuver even for a seasoned diver such as myself – preparing to ascend to the top. Around 20ft below, a school of blue and gold snappers engulfed me, and just as I began cursing myself for shutting my camera off, there he was, a juvenile great white shark from which these friendly fish were seeking refuge. Just a glimpse, and then he was out of sight – like a bad horror movie, the visibility was roughly 25 feet but his shadow was unmistakable…like the movement of an African male lion through his grassland domain…the Great White has a prowess that’s palpable.

Panic. I had done so well thus far, it was a shame to feel it, but caught in the middle of a lavish fish salad – I couldn’t help it. Now I was not only alone, being carried through open water, but one of the ocean’s most formidable apex, ambush predators had me in sight. I about gave myself whiplash looking in all directions, just waiting, knowing my mother would kill me if I were to be attacked, and while my scuba training was urging me to surface, my knowledge of sharks kept me below, continuing to drift through the Pacific. I would be at a much more vulnerable position at the surface, I would have fewer defenses, and these snappers would really miss me.

After roughly seven minutes (or seven years depending on who you’re asking), without additional sightings, I decided to head for the surface, praying someone would be there to get me the hell out of this nightmare of a dive. Blaring into my whistle, while keeping an eye below for Chuey, I was desperate to attract the attention of a skiff driver over 300 yards away. It didn’t take long to get me out of the water and back to the boat where I tried my best to appear composed as I waited for the rest of the team to come back from their dive. Once aboard, they were kind enough to keep their whale shark sighting on the down-low until the dust settled.

Motoring back to the mainland, reflection sets in. I smile – there’s something idealistic about understanding your place in this world, how extraordinary this amazing life is, and how we are all mere pieces of this quixotic puzzle.